We supply and install various models of drinking water fountains, with either room and/or cold features. they are mostly used in office, schools, public areas,etc

They come in several finishes with the stainless steel being the most favorable. Addition of taps can supply, chilled and/or room temperature water.

These can be coupled to an external RO unit or even supplied by directly mains water. Wall mounted models are also available depending on clients location and/or use.

A drinking fountain, also called a water fountain, is a fountain designed to provide drinking water. It consists of a basin with either continuously running water or a tap. The drinker bends down to the stream of water and swallows water directly from the stream. Modern indoor drinking fountains may incorporate filters to remove impurities from the water and chillers to lower its temperature. Drinking fountains are usually found in public places, like schools, rest areas, libraries, and grocery stores. Many jurisdictions require drinking fountains to be wheelchair accessible (by sticking out horizontally from the wall), and to include an additional unit of a lower height for children and short adults. The design that this replaced often had one spout atop a refrigeration unit.

The term bubbler is used in some regional dialects of the United States and in Australia.[13] A survey of US dialects undertaken between 2002 and 2004 found the word bubbler is commonly used in southern and eastern Wisconsin and in Massachusetts and Rhode Island. The phrase drinking fountain was common in the rest of the inland north and in the west, while water fountain dominated other parts of the country.[14] 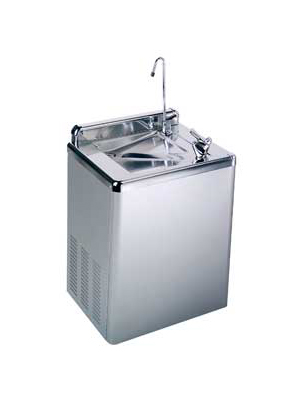